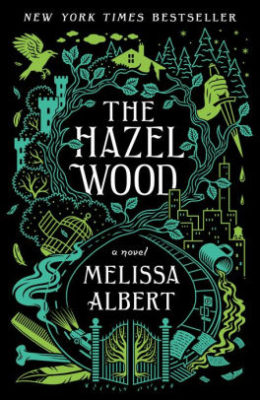 “I kept imagining how it might feel to walk through someone else’s space, tasting all the strange things you could do there.”

“I scooped up enough melt to wash the blood from my hands, reaching for a prayer, a poem, a goodbye that felt right.”

Title: The Hazel Wood: A Novel

Seventeen-year-old Alice and her mother, Ella have spent most of her life on the road, constantly followed by bad luck. Her grandmother is a famously reclusive author of a book of dark fairy tales. For some mysterious reason, Ella refuses to discuss her grandmother or the book that she wrote. A strange letter arrives delivering the news of the grandmother’s death, alone at her estate, the Hazel Wood. Ella believes their luck has changed, and the duo attempt to settle down in New York.

Alice discovers how bad their luck can get when her mother goes missing, and everything leads to her grandmother’s stories and Hazel Wood, the one place she was to never go. Alice made it a rule to avoid her grandmother’s cultish fans, but now a classmate and fan may be her only ally. Ellery Finch knows more about her grandmother and her stories than she does. To rescue her mother, she may have no choice but to accept his help, even if he has an underlying motive. Alice and Finch journey to Hazel Wood, to where it all began, so Alice can discover why the story went horribly wrong.

The Hazel Wood: A Novel is the first in the Hazel Wood books by Melissa Albert. The book follows the fairy tale type bringing to life new fairy tales. Alice and her mother are connected to another world called Hinterland that is the home of various stories. Through some happenstance story characters from Hinterland are spilling into our world.

Albert uses the concept of stories are only as strong as they are remembered and retold. When a story is no longer told, shared, and remembered it is no longer a story, just a fragment of forgotten characters. In Hazel Wood, the Spinner is the person who wrote the story, and if they write the story well enough, they can create another world in which the stories continuously play out, that is until they are forgotten. Trouble arises when characters and people from their world and our world cross back and forth between worlds.

I liked the way Albert based the story around a book of fairy tales, using characters from those fairy tales within the storyline. The stories that were incorporated within Hazel Wood were also included as excerpts along the way. Albert managed to include the various fairy tales by making the main character of Alice discovering them as she strives to save her mother and figure out the mystery behind her grandmother. As a big fan of fairy tales in general, I liked the incorporation of them as a part of the story and a mysterious driving force of the characters.

I personally found the book kind of slow at the beginning and difficult to be enthusiastic about reading. The story is told from Alice’s point of view but seemed confusing initially. Alice and her mother are the only family they have, but then again they are not as there is a mysterious famous grandmother that they have no contact with for some reason. They travel around a lot, somehow it is implied that is to avoid the grandmother and start fresh due to their rotten luck. You know something happened between Ella and the grandmother, but you are not sure what until much later in the book, by then you kind of guess or really don’t think it is that big of a deal.

As not all of the fairy tales mentioned in the book are told, as well as the ending left some details up in the air as to the fate of Ellery and Hinterland you get the feeling there will be a sequel. Albert doesn’t disappoint readers by leaving them hanging. The sequel to The Hazel Wood: A Novel is The Night Country: A Hazel Wood Novel is scheduled to be released January 7, 2020. For those interested, you can preorder your copy here.

To order your copy today of The Hazel Wood: A Novel, go to: